COACH, WHY ISN’T MY CHILD PLAYING?

Have you ever been caught off guard by a parent questioning your ability or skill to coach? Odds are at some point in your career, to some degree, it will happen. It may be subtle hints or even an angry conversation.

How will you react? Defensively? Angrily? Surprised? All are natural reactions to someone ultimately attacking your character and or ability. At least that’s the way you may see it. Is there another view? 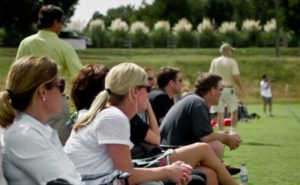 Playing time and awards are the number one challenges you’ll face with parents. “Why isn’t my child playing or playing more?” and “How could my child not have been the MVP or been omitted from that all tournament team?” will always be questions you may have to deal with.

As a coach you may be surprised when it’s after a big win or after a season when your team was very successful. Keep in mind it’s a challenge that is blind to winning or losing. Your team could be 20-0 or 0-20 when this situation presents itself.

For those of you who’ve experienced a confrontation of this nature, when all the dust settled and you had time to think about the situation, were you in the wrong? Did you make a bad decision? Did it have a more far-reaching impact than you intended? Were you hoping it would go away on its own? Should you have addressed it, but didn’t?

Initially it’s tough to absorb, especially when you pour your heart and soul into your team day after day. How could anyone think that you weren’t capable of or dealing conscientiously with the challenges of coaching?

The first step is to see it from their perspective. Not from a “I’ll prove you wrong” attitude, but from a “Let me replay and think about the situation” and what really happened.

Many coaches refuse to talk about playing time with parents and have guidelines that state the same. Will that deter a parent who sits with other parents of players who play the entire game and cheer their kids on? Doubtful.

As a game progresses they become more and more upset, and often will seek you out after the game. Initially you may want to be brutally honest concerning the ability of their son or daughter highlighting all the skills they’re lacking or their sub-par athleticism. But, of course, that is not the right approach. Parents will always see their sons or daughters in a positive light and think they are the best player on your team. Nothing you say in a negative way will ever change that. While you may want to win this battle it isn’t necessary. Stay composed and positive, focus on the attributes this player has and why you kept them on the team.

Should there be ground rules for meetings concerning these situations?

Develop your own expectations for meeting with parents.

2. Call for an appointment, no email or social media.

3. No mention of any other players at the meeting.

4. Meetings will include Athletic Director

Explain and hand these out to all parents at the first meeting before the season begins. Let them know your philosophy with respect to starting, playing time, practicing, awards, etc. It won’t make you immune to a confrontation, but it will help knowing you did it.

In the end your best course of action will be to simply listen to everything the parent has to say. Refrain from countering every point they make and wait until they finish before you speak. You’ll have time at the end to state your points. Listening will give you great insight to their perspective, and ultimately let them get rid of what’s bothering them so much. They may even say as one of my parents said, “We know Billy isn’t the best player in the world, but if you could just find a way to get him in a game or two we would be thankful.”

Always keep in mind a child is the most important piece of a parent’s life.

I wish you and your team the best!


View in a larger format and find out more about the video HERE.